Performing Cancer in the Middle East 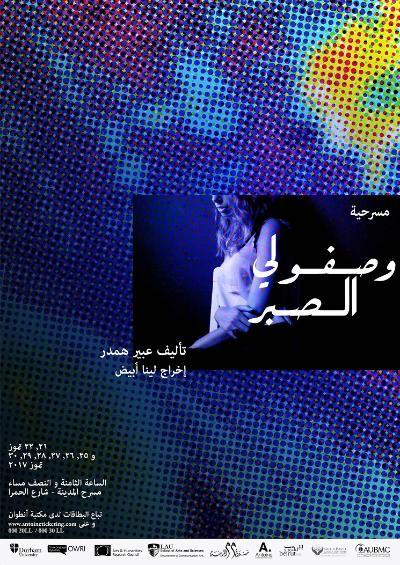 As part of her project on cultures of cancer in the Arab World, Dr Abir Hamdar has written and co-produced the play titled 'I am waiting for you' (وصفولي الصبر), based on interviews with cancer patients and consultations with oncologists at the American University of Beirut Medical Centre (AUBMC), in collaboration with the Naef K. Basile Cancer Institute (NKBCI). The performance was directed by Lina Abyad and first performed at the Madina Theatre in Beirut, Lebanon, between 21 and 30 July 2017. See: I am Waiting For You Programme.

'I am waiting for you' is the first dramatic staging of Arab women's experience of cancer. The play's aim is to foreground and break some of the cultural taboos vis-à-vis this disease in the Arab world, and to showcase to experiences that have for long been rendered unspeakable. The project's broader ambition is to raise cultural awareness of the politics of talking about, and caring for, cancer patients in the Middle East. The full account of the preparations, staging and outcomes of this project are available here. Accompanying the production was also a 4-minute short film, directed by Soha Choucair and Lina Abyad and edited by Moonshot Post-Productions.

In addition, a 30-minute documentary about the performance has been produced by filmmakers Paloma Yáñez Serrano and Benjamin Llorens Rocamora of The Big Tree Collective. They also recorded the post-performance Q&A session with the author, director and actors (in Arabic), as well as two post-performance interviews (in English) - one with the Lebanese poet, novelist and playwright, Jad el Hage, and the other with Lubna Izziddin, founder of SANAD, the Home Hospice organisation of Lebanon. This short documentary featured also at the Language and Identity: Explorations Through Film mini festival (screenings and discussion with filmmakers), The former Cornerhouse, Manchester.

The play was also performed at the LAU Medical Centre - Rizk Hospital on the 8th August 2017. This was the first time adult theatre was staged in a working hospital in the region, with patients and staff as audience. Another performance took place in Beirut on 8 February 2018 to mark World Cancer Day (4 February). The performance was hosted by the Naef K. Basile Cancer Institute (NKBCI) of the American University of Beirut Medical Centre (AUBMC) and performed at its Saab Medical Library. Further performances took place on 1-2 December 2018, in Nabatiyeh, South Lebanon, hosted by the Nabih Berri Government University Hospital, and also at Sanayeh House in Beirut.

The findings of Dr Abir Hamdar's research and the reactions to the performance of her play were also presented at the New Directions in Qualitative Health Research: From Patient Experiences to Participatory Action Research Conference, organised by DIPEx International. This event, a major forum where international research on patient experiences of health and illness is discussed and developed, took place on the 5th November 2018 at the University Medical Center in Groningen, Netherlands. A screening of the above-mentioned short film, directed by Soha Choucair and Lina Abyad, followed the presentation.

In September 2019, Dr Hamdar was appointed Creative Consultant to the Naef K. Basile Cancer Institute (NKBCI) of the American University of Beirut Medical Centre (AUBMC), in order to facilitate and support the delivery of the Institute’s Arts-in-Health programme.

A further video installation, which re-presented and re-staged extracts from the original script of I am Waiting for You, but focusing specifically on the trope of female hair loss during cancer treatment, was exhibited on 4-7 February 2020 at the Naef K. Basile Cancer Institute (NKBCI) of the American University of Beirut Medical Centre (to mark World Cancer Day). This installation was accompanied by the live performance of a new ethnodrama by Hamdar, which similarly explores female hair loss following cancer treatment, but from the perspective of male family members. The video installation and live performance, which premiered simultaneously at NKBCI, are entitled ‘Hair Talk’.

On the 3rd December 2020 the Performing Arab Cancer project, which deploys creative, performative, visual and critical practice to generate a ‘living archive’ of Arab female cancer stories and testimonies, was shortlisted for the AHRC / Wellcome Trust 2020 Medical Humanities Awards in the Best International Research category.

The outreach and impact of the Transnational Strand project range from local outreach in Durham County to influencing policy on radical Islam.
Find Out More