Landscape Archaeology in the Middle East

Work undertaken in the Middle East is a key element in the profile of the Landscapes of Complex Society Research and Impact Group. We work at a variety of scales. These extend from excavation and survey at individual sites, through efforts to document and understand the landscape dimension of human activity in different regions, to the analysis of major trends at multi-regional scales.  We work in countries including Syria, Iraq, Iran, Oman, Georgia, Azerbaijan and Kazakhstan. In addition to fieldwork, we also bring together legacy data and information derived from remote sensing, and thus investigate regional and pan-regional patterns and trends, that would lie well beyond the scope of any single field project.

We have developed a suite of methods for integrating and synthesising data from different sources to make robust interpretations, and this model underpins much of our work. Our research examines key transitions in social complexity, such as the emergence of urban centres and the rise of large territorial empires, and the implications these had for human-environment interactions. More recently we have been developing research agendas related to ancient climate change and heritage management which build upon the datasets collected over the two decades of landscape projects in the department.  This page collates information on projects that are presently undergoing analysis and publication. For current projects (e.g. EAMENA, Persia Project and CLaSS) see individual project web-pages. 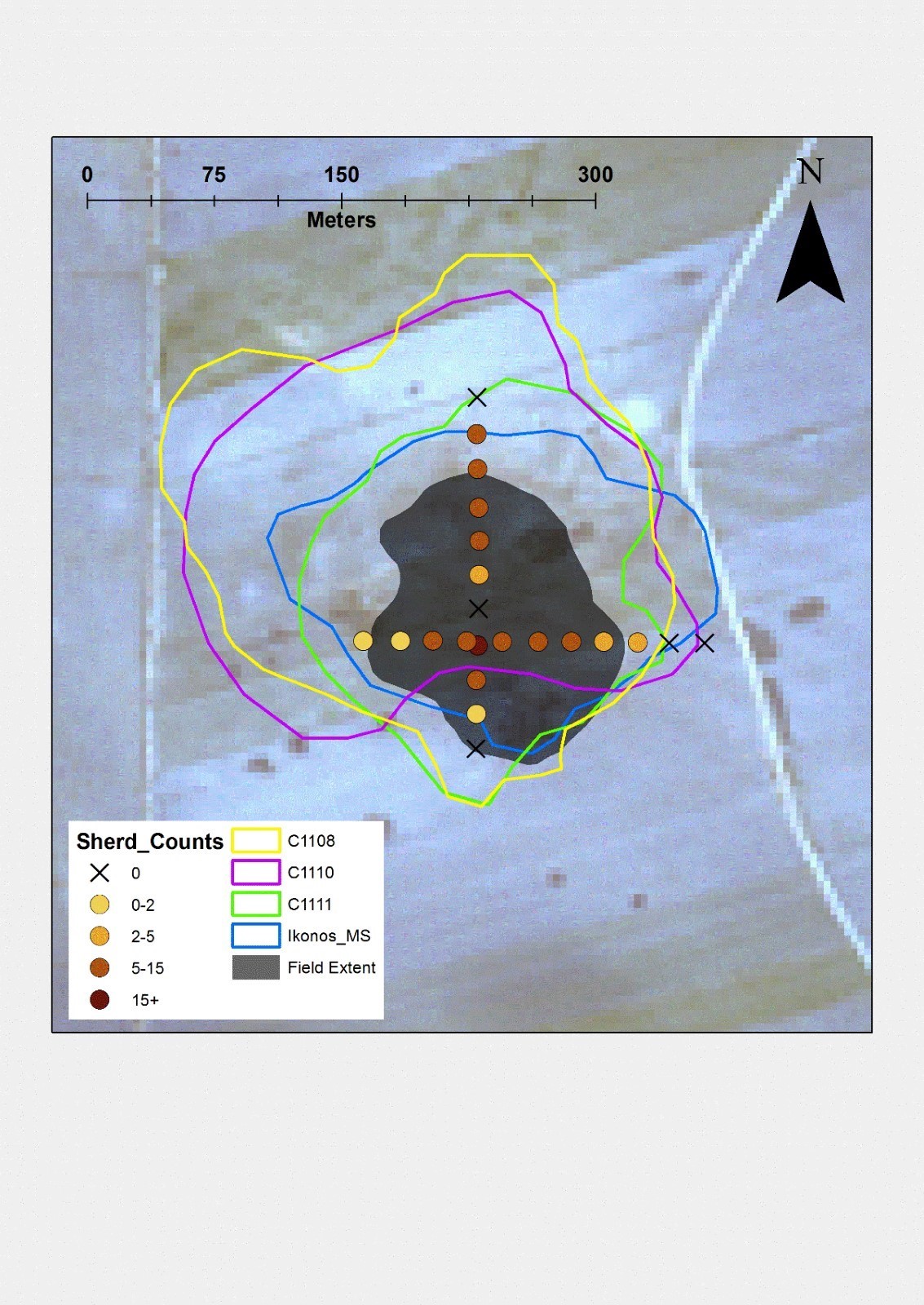 Image above: Shows the extent of a ploughed out settlement in western Syria as indicated by: soil discolouration as observed on the ground;  the density of sherd coverage; the spread of high reflectance deposits in different types of satellite photography, including several different sets of Corona imagery dating to the 1960s and recent high resolution imagery

Funded by a research grant from the AHRC (2008-13), the Fragile Crescent Project brought  together the evidence from ancient landscapes, settlement patterns and archaeology to examine the rise of the first urban settlements and early state societies in the rain-fed agricultural landscapes of west and north Syria and Northern Iraq. We have sought to do this in a way that is comparable with Roberts Adams’ work on the so-called heartland of urban development, in the irrigated landscapes of in southern Mesopotamia. Data from numerous surveys in the region, enhanced by remotely sensed information, were brought together within a single analytical framework allowing us to understand the development of early towns and cities, from ca. 4000 – 2000 BC. A key aspect of this project was the design of a bespoke database capable of recording information from a variety of different sources. The approaches developed, including the basic categorisation of the data, and the uses of certainty and precision to consider the accuracy of legacy data, and the resulting dataset itself, have underpinned much of the subsequent large scale work undertaken in this region, including the EAMENA and CLaSS projects. Synthesising datasets at this scale allowed us to identify multiple pathways through which urban sites developed in the region, and to understand how these were linked together in an integrated system reliant on new forms of landscape exploitation, exchange, risk management and political control.

Persia and its Neighbours: the Archaeology of Late Antique Imperial Power in Iran

Funded by a grant from the European Research Council, the interdisciplinary Persia and its Neighbours project considered the Sasanian Empire (224-651 AD), a relatively understudied polity which stretched from Egypt to the Indus Valley including Mesopotamia and parts of Anatolia and the Caucasus. For further details see URL for Persia Project page.

The Land of Carchemish Project investigated a region to the south and west of the major urban centre of Carchemish, which located is in the Euphrates Valley on the Turkish-Syrian border. It was directed  by Professor Tony Wilkinson (Durham) and Professor Edgar Peltenburg (Edinburgh) and involved four field seasons between 2006 and 2010 before fieldwork was curtailed by the Syrian conflict. Funding came from the Council for British Research in the Levant (CBRL) and the British Academy. Surveys in this region had previously concentrated on the Euphrates Valley, often in advance of large dam projects. The LCP recovered some additional sites in the river valley, but also in the limestone uplands and fertile plains further to the west, enabling a more complete understanding of the dynamics of the wider landscape. Detailed work was also conducted on the site of Carchemish itself, which sits partly in Syria and partly in Turkey. Analysis of the lower town of the site, the main portion of which lies in Syria, as well as the integration of satellite imagery and information from Leonard Woolley’s excavations prior to the First World War, enabled the project to reconstruct the different phases of occupation, from a small Chalcolithic settlement to major urban phases in the Early Bronze Age, Iron Age and Roman period.

Settlement and Landscape Development in the Homs Region, Syria / The Vanishing Landscape of Syria

This was a multidisciplinary field project undertaken in co-operation with the Syrian Directorate of Antiquities and Museums 1999-2010, and pioneered the systematic use of high-resolution satellite imagery to inform survey strategy on the ground. The study area in the Orontes Valley was chosen to assess the impact of key cultural and environmental developments in adjacent, but contrasting, landscapes - the marl terrain to the east of the Orontes and the volcanic regions to the west.  The project was Directed by Prof. Graham Philip and Dr. Michel al-Maqdissi and Prof. Maamoun Abdulkareem (DGAM, Damascus), with work stopped by the outbreak of conflict in Syria conflict in 2011. Fieldwork was supported by the Council for British Research in the Levant, The British Academy and Durham University. Post-fieldwork analysis was undertaken as Vanishing Landscape of Syria project, supported by a grant from the Leverhulme Trust. 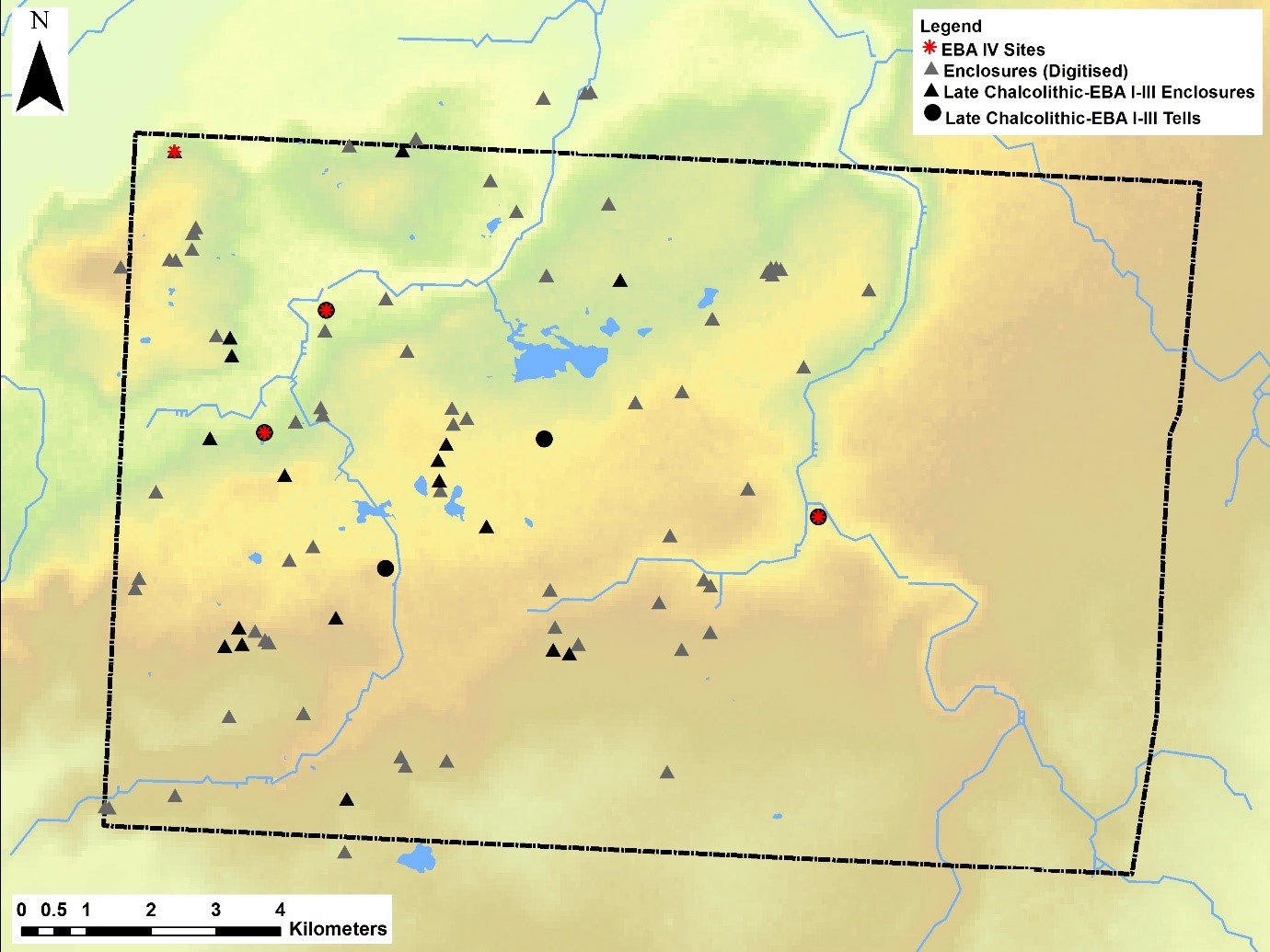 Image above: The basalt landscape west of Homs, Syria. Image shows the contrast between the handful of permanent settlements (circles) which lie in the river valleys, and the more numerous walled enclosures (triangles) probably associated with seasonal animal herding, which are concentrated in the upland areas

This project investigated the archaeological site of Semiyarka in northeast Kazakhstan and was funded by the British Academy/Leverhulme Trust. Semiyarka lies on the eastern edge of the steppe landscape of Central Asia, which stretches from Hungary to western China. During the Bronze Age (c. 3000 – 800 BC) people, animals and ideas moved across this vast area, establishing connections which would eventually formalize into the trade network known as the Silk Roads. Our project used CORONA photography, modern high-resolution satellite imagery and drone photography to produce a detailed map of the site. We also undertook geophysical prospection and conducted a surface collection. Our results show that the site was between 70 and 140 hectares, making it one of the largest prehistoric sites in Central Asia. We recovered evidence for tin-bronze production in crucibles, a technique which has not previously been found in the steppe region except close to the mines where the relevant ores are found. From the pottery on the surface we can date the site to the Final Bronze Age (1200 – 800BC). Intriguingly, this means the site became prominent just as sites along a southern route through the steppes and mountain corridors declined, suggesting that a hitherto unrecognized northern route across the steppe may have developed during this period. The results of this project are being prepared for publication.